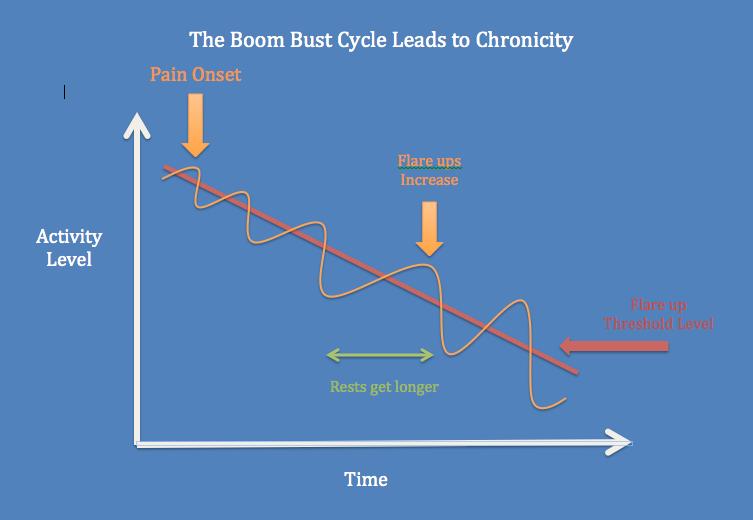 The first thing I had to learn in order to start the process of getting better was to halt the 'Boom and Bust cycle' I was stuck in. It goes like this and I am sure you can relate... Yipee, a good day, pain not too bad, therefore I will do more, clean the bathroom, go shopping, a little exercise, drinks with friends, what it is doesn't matter its the 'over-doing it'. Then comes 'payback'! Its one of the things with CRPS that I learnt early on; that was I paid for everything I did, with the currency of pain. The more I did or tried to do, the greater the bill. Sometimes the pain onset was immediate, sometimes it would be a delayed response but sure as night follows day if I over did it I would suffer for it! Gradually I could do less, getting less value for my money, therefore I had to start doing less. My leg deteriorated, becoming more and more sensitive, my flare ups became more regular and lasted longer with greater intensity. Truthfully it was very scary!

Fortunately I halted the nasty decline. Thankfully I met Tim, who said to me in our first meeting: "In order for me to improve, I have to prevent this boom and bust cycle", I needed to plateau! "Not to have good days and bad days but to have consecutive average days". Sounds dull, doesn't it, well at least that is what I thought, but I know it was completely necessary. I now believe this was the starting point of getting better and essential for recovery. Tricky as hell, particularly if you are as impatient, driven, and determined as me. First I had to learn to accept this situation and that I could not force my way through it, I had to learn to listen to my body so that I knew when to stop, then I actually had to stop, which is so much harder than one might think. However over time, my flare-ups became less frequent and less severe. Six months after, my first appointment I had a row of 20 days of 'average-ness'. Now this doesn't mean I wasn't in any pain, because I really was, but it was not soul-destroying flare-up level pain, it was manageable pain, and a starting point to work up from. Also my flare-ups stop lasting weeks of super-intensity to a week, and gradually to days. What I am trying to say is that it is VITAL to stop the flare-ups! This doesn't mean to stop doing things, in fact the opposite. It means that you need to slow down, listen to your body and gradually build up from a baseline level. This is explained in much more detail on the Pacing and Graded Exposure Page of this site. Check it out!

Honestly though...there were one or two times where I made the descision to take the hit and accept the impending flare-up (I am not reccommending this, but it is important to stay sane as well!). One time that comes to mind was my brothers wedding. I knew it would be a difficult time and guaranteed to flare things up whateveer I did. So drugged up on tramadol and a few glasses of champagne I embraced the weekend in Ireland, the wedding day and all the celebrations. Having a sore but great time, chair dancing and all. Yes, I really did pay for it over the following three and half weeks but I wouldn't change that as would have regretted missing my brothers wedding and celebrating to the max of my capabilities at the time. These times were very few and that often making the really difficult and inmy opinion damn right unfair descision of leaving early, going for aquiet breaks or a lie down throughout th eevening/day or sometimes not going to occasions at all. This is really difficult and upsetting at the time but I wanted to get better more than anything and by not staying on track would mean a flare-up, a flare-up meant setting me back, as I couldn't improve during this time and take a step backwards down the hill to the ground I I had clawed back.

It is not all doom and gloom though and worth the sacrafices of today for the fun times of tommorrow. It is worth it as 14 months later at my older sisters wedding I walking down the aisle (as bridesmaid) with one crutch, and danced (on a chair) till one am (we had started getting ready at 8 am that morning). The rest of the weekend my ankle was sore, by Tuesday it was over! I am trying to stress is that preventing flare-ups is key.